My recent post getting all nostalgic about vintage Tetris reminded me that I was going to wax lyrical in a wistful response to James Gurney, of Dinotopia fame, over his coining the phrase “dead-tech”. You’re not following his blog? You should. James has begun a series of articles on old graphic arts equipment and the first thing he hauled out to show the young ‘uns was the waxer. Ah… it was enough to send me hunting through my own cupboards. 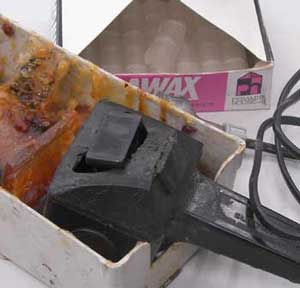 Pictured, is what was my trusty forerunner to repositional spray adhesive, which was in turn the forerunner to Ventura Publisher for the bookish (remember that?) or Quark Xpress for the hip.

Said implement, was the means to making stuff stick temporarily. After rolling the reverse of a bromide to the sound of… dunno how to explain it… it would be pasted down with a good rub using the heel of the palm. Not in the right spot? It would be peeled up to be moved with the mere flick of a blade at the corner. The bit of bromide would then be lifted with the blade (so as not to touch the wax with ones fingers) and put lovingly in the new position. Or should this be the umpteenth round of changes: slammed down in disgust.

Oh, yes, the scent of molten wax wafting across a light-table…

Have a good laugh,
Amanda
(wondering if there’s a use for it in the studio…)