Paul Foxton, from Learning to See, has released two video tutorials over the past month. Each one features a beautiful little flower painting, is hands-on practical, self-contained and easy to follow. Which would I recommend? Both!

They are available at Gumroad for “pay what you want”. I will add that the suggested $10+ is a bargain. Be generous. 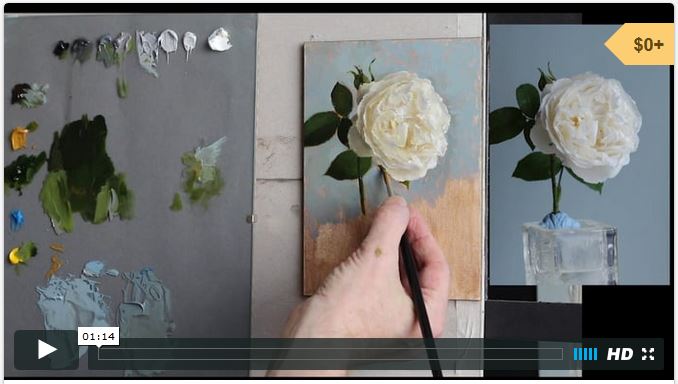 Time’s Unfolding, the first of the two tutorials demonstrates a flower painting from setup to finish, covering everything from sight-size, grid-assisted drawing to value control and the thoughts behind the motif. What I like about the way Paul teaches is his way of breaking down complex ideas into practical steps that can be applied to any subject. (He’s a master at skipping the mumbo-jumbo. A rare skill.)

The point he really nails in this one is that it’s about slowing down and taking the time to look (with the aid of a few simple, home-made tools to help figure out what you’re looking at). 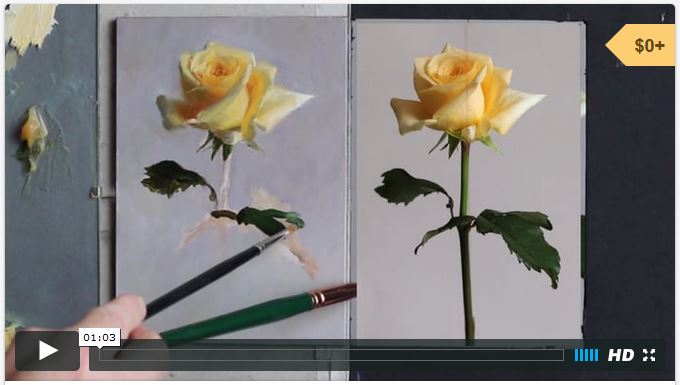 The second video, Secret Treasure: A Munsell Painting Demonstration, builds on the first, and as the title says, is much more about what Munsell is and how it can be used to assist in making a painting. It begins with a practical guide to describing and analysing colour, before using Munsell as a tool to mix and match the colours needed to make a particular painting.

The delicate transitions in his little flower motif are exquisite, but the point he makes is that matching them it isn’t rocket-science, it’s about taking care in comparing one patch of colour to the next. Munsell is used to describe the differences between each mix very clearly in terms of hue, value and chroma. Again, no mumbo-jumbo, it’s about learning to see the variations and use them.

I’ve been using and writing about Munsell studies since 2007 (my ‘colour theory’ category should find most of them), but Paul’s video is a much easier way to learn!